Ah, and in keeping with the amazing story brewing over at the ADR, we’ve got… an (even more) updated map, from JMG’s Retrotopia.

The latest updates on the map of Retrotopia will be here, since JMG has been tweaking the map a bit.

I drew the split in Idaho at the Salmon River Mountains, which seemed reasonable.  Stuff that hasn’t been colored in hasn’t been defined just as yet; the blue is the Lakeland Republic, of course, the star of the show, and which JMG will be outlining for us in the weeks ahead.   He’s said he wants to concentrated on Lakeland, so don’t pester him (generally, unwise!) about what else is going on.  My unwritten hunch on Nevada and Arizona being abandoned was right; those places are in trouble *now*; in a few years, yes, they’ll be abandoned.

The status of Kansas and Missouri are currently unknown; perhaps they are disputed, or despoiled. 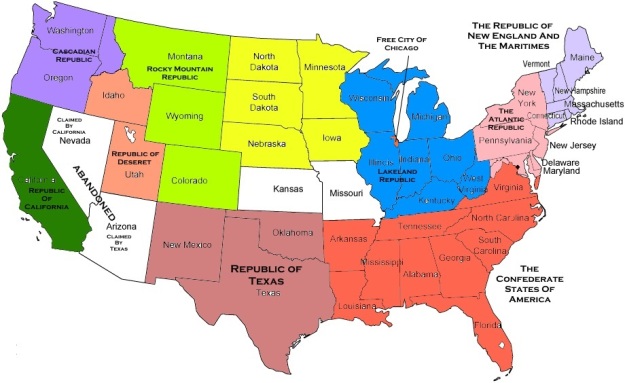 My bet is that New England, as in other possible futures, is united, but who knows?  Maybe JMG will throw us a curve ball or two.

Along with this map, I’m posting current freight rail and passenger rail maps of the US, which might be of some interest to the story.   Rail traffic may increase, as well as inland waterway traffic in the coming years.

These maps were originally here.

It also might be worth looking at some canal maps – some of these may not exist, or be in disrepair; a quick search on some of them (the Wabash and Erie, for example one of the longest canals ever built), shows that they aren’t all in operational order.

This site uses Akismet to reduce spam. Learn how your comment data is processed.